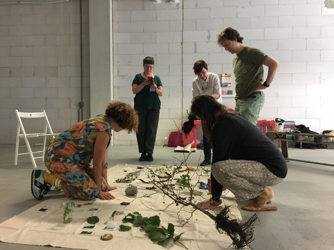 This is the fifth of a series of blogs about creative urban methods. For the introduction and longer versions of the blogs, see the website of CRUM.

There has been a surge in critical studies on the ongoing ‘datafication’ of urban life (van Es and Schäfer, 2017), for example, in relation to data extraction, algorithmic processing and data-driven decision-making. Usually, the collected data, the purposes for their use, and the derived forms of value are beyond the grasp and access of ordinary city inhabitants. Yet, citizens are rarely involved in discussions about ‘data’, which tends to remain a rather abstract and elusive concept, remote from everyday urban life. Datafication however directly affects people’s lives like for example CCTV cameras that record where you have been in the city or asphalt that monitors the speed of your car.

To address this issue, we set out to experiment with creative methods that could open up such discussions to urban residents. We chose to focus on a new neighbourhood of Utrecht, Leidsche Rijn, developed as a ‘Vinex’ neighbourhood in an area with a thriving agricultural past. Using a mediated co-design approach, we reached out to residents by connecting with a local artist collective, The Outsiders. The artists have gained extensive knowledge of the neighbourhood and established relationships with local communities over time, engaging them through artistic interventions that reflect local issues (e.g., The Travelling Farm Museum of Forgotten Skills).

In September 2020, we co-organised a small-scale workshop, entitled Sowing Sustainable Prospects: Explore the Landscape of Leidsche Rijn and Imagine the Future, to test out a creative method for involving citizens in thinking about, and imagining potential neighbourhood futures, based on local ‘data’. We developed the method in collaboration with the artists to reflect our initial research question on civic participation in the datafied city, while addressing their interest in sustainability.

Rather than looking for data understood in a technological sense (which is typically the case in ethnographic critical data studies, e.g., Powell, 2018) we invited the participants, organised in small groups, to openly explore the landscape ‘data’ of the neighbourhood. We proposed the themes of sustainability, nature and food, and asked them to take instant photos and collect any fragments of the landscape that made them think about these themes (e.g., objects, elements from nature). After this ‘data walk’, we analysed the physical materials and mapped them onto a large tablecloth, in the artists’ depot.

The participants mapped the data by making associations between the various items and grouping them into themes. The relationships between the items were marked with tape and annotated with a brief explanation. At the end of the mapping, a constellation emerged, made up of the data (objects, photos) and links between them (tape). The constellation became a prompt for re-imagining futures for the neighbourhood in the form of writing speculative postcards from an imagined future.

The workshop raises three key observations, which could be reflected upon using the metaphor of ‘gluing’. First, it highlights the importance of ‘gluing’ relationships with non-academic partners. This can lead to creative crossings (Verhoeff and Dresscher, 2020), for instance between academic and artistic knowledge and practices. In turn, this can enable the emergence of new understandings and creative approaches that would have not taken place otherwise. Second, such relationships can ‘glue’, or anchor, abstract topics, such as ‘data’ and ‘datafication’, in particular urban contexts. This can bring the issues involved closer to people’s everyday environments and lived realities, while retaining connections to broader societal issues, such as sustainability and climate change. Third, speculative and creative methods can ‘glue’ diverse future imaginaries by giving room to multiple perspectives and voices, while exposing diverse values, worries and aspirations about urban futures. While current urban imaginaries tend to be dominated by smart corporate actors, there is a pressing need for approaches that include citizens more widely in debates around desirable city futures. Shaping new ‘social imaginaries’, departing from the here and now, could help assembling new practices so that other futures can actually come about.

BIO
Corelia Baibarac-Duignan is a postdoctoral researcher at the Department of Media and Culture Studies, Utrecht University. Originally trained as an architect, her research crosses the fields of urban sustainability and technology-mediated civic participation.