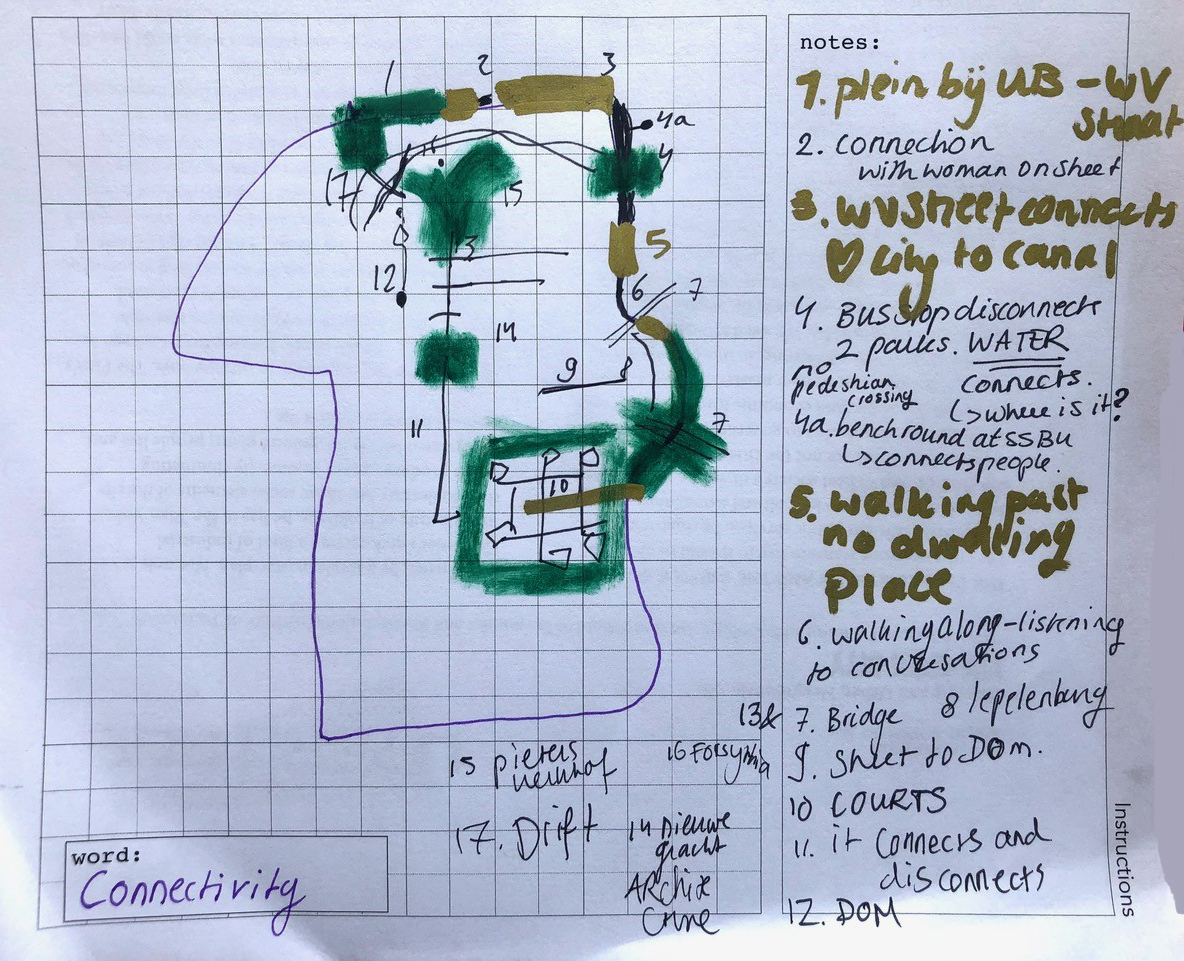 This is the last of a series of blogs about creative urban methods. For the introduction and longer versions of the blogs, see the website of CRUM.

In this blog we introduce a creative walking method that we designed to engage with urban theory and issues. Walking the city is a way to include the embodied positionality of the participant and the specificity of location into theorizing and understanding the city. Additionally, the experience of walking the city helps to generate questions and raise awareness around complex or abstract notions of the urban. Or, to speak with Michel de Certeau in The Practice of Everyday Life (1984), walking the city helps to experience the city ‘down below’. We situate our method within the broader context of the urban humanities, a field that is “grounded in an evolving set of experimental practices aimed at creating and opening up possibilities for engagement and inquiry in urban settings”(Cuff, 2020, p.85).

The Open City
As our example we will use the workshop Walking-Thinking that we organized during the pandemic in March 2021 as part of the Open City Initiative. The two, partly online, sessions revolved around the following questions: What makes a city open? When do we experience a city as open? The first session consisted of a walking exercise in which the participants mapped the ‘openness’ of their own neighbourhood. In the second session participants compared their maps and used these as conversation pieces. Eight people participated: a mix of students, PhD candidates, academics and young professionals. Their academic backgrounds varied from architecture, sustainability studies, theatre studies, media studies and literature studies to anthropology.

Starting point for the workshop was Richard Sennett’s text ‘The Open City’ (2006) in which he advocates for an open city. Modern cities, according to Sennett, in many respects are conceived of and built as ‘closed systems’: spatial segregation isolates people into homogeneous class, racial and ethnic groups and over-determination of the functions of public spaces restrict opportunities for cities and their citizens. Whereas the closed system is characterized by equilibrium, integration and over-determination, the open city, according to Sennett, is characterized by density, diversity, dissonance, incompleteness, indeterminacy, incompleteness and informality.

Walking and talking
In order to make Sennett’s text their own, we asked participants to refine and possibly expand Sennett’s qualifications by asking themselves what ‘openness’ entails and what qualities it can be associated with. This way participants co-created a legend for the open city which contained the following attributes:

From this final list we randomly assigned one attribute to two participants. They would then both walk their own neighbourhood using this attribute as a lens for their observations. On their map they traced their route, locating and marking spots, instances and moments of ‘openness’ understood through this specific lens. With markers of different thicknesses they expressed the degree of openness they perceived; thick being less open and thin representing more open.

In the second session the participants reflected on each other’s maps and discussed how openness manifests in our direct surroundings and what the value of openness for our cities might entail. This gave way to interesting conversations. Participants analyzed that openness can be experienced in materials, architectural design, the behavior of people, the multiplicity of functions, in time, as well as in the weather. They observed that, as an experience, openness, in spite of Sennet’s positive connotation, is also challenging, can be threatening and is not achieved easily. Some noted that openness for some often means restrictions for others.

The value of Walking Theory
Participants gave back that Walking Theory as a creative method offered a very different way of engaging with a theoretical text. It fostered a particular kind of urban sensitivity that not only changed their perspective on their own neighbourhood, but also invited and activated them to bring their lived experiences into dialogue with theory in an interesting way. Or as one of the participants said at the end of the workshop: “now I could write a critique on Sennett.” Walking-Theory shares with other urban humanities practices an experimental openness that allows engagement from participants: “they skirt the line between scholarship and art, proposing new ways of learning, teaching, and being, just as they also make no claims to be definitive but, instead, allow for change, improvement, and modification” (Cuff, 2020, p.135).

BIO
Sigrid Merx is associate professor in Theatre and Performance Studies in the Department of Media and Culture Studies at Utrecht University. Jente Hoogeveen is a designer and researcher working in the arts and academia.